High ankle sprain – what is a syndesmosis injury? 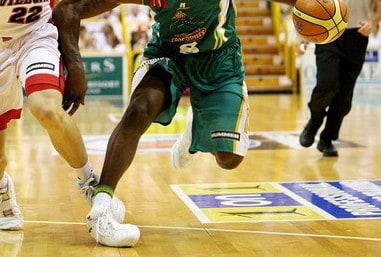 Ankle injuries are common in most sports and can vary in severity. An injury that gets a large amount of limelight in sports such as Rugby League (and is important not to be missed!) is a high ankle sprain or syndesmosis injury. So what is it? 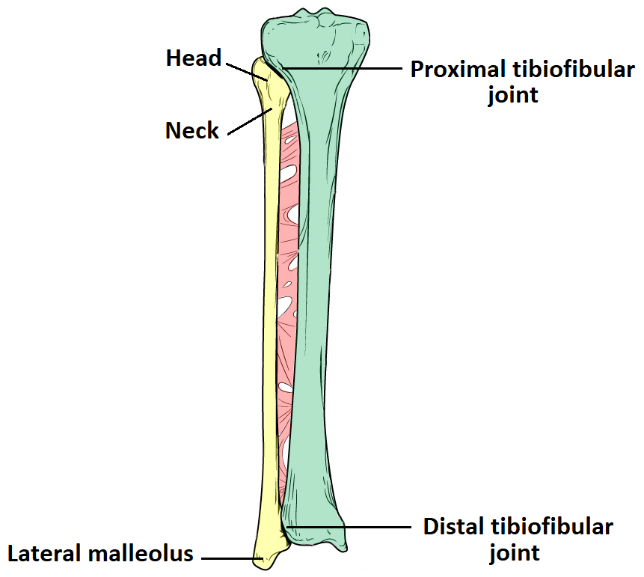 The syndesmosis can be seen here between the tibia and fibula.

The ligaments which help keep this joint stable are categorised by their 3 locations: 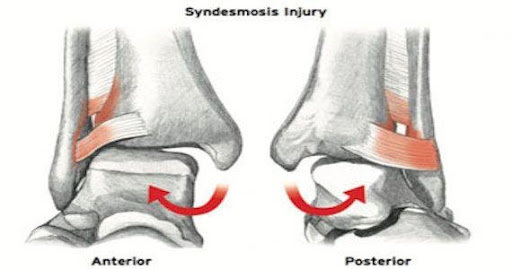 The two posterior ligaments are responsible for 40-45% of stability for the joint; with the anterior ligament contributing 35% and the middle ligament 20-25%.

How does a syndesmosis injury occur:

Most commonly the ankle is forced into and beyond end range positions of dorsi-flexion (foot bending up towards your shin) and external rotation (foot rotating away from your body). This can happen in contact sports when someone falls onto the outside of your ankle. 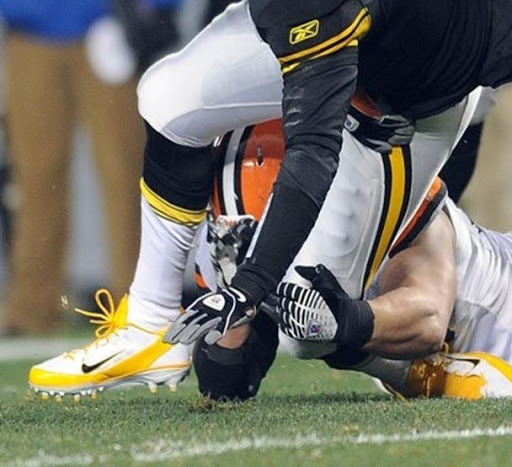 What are symptoms of a syndesmosis injury:

Syndesmosis injuries can feel somewhat similar to the common lateral ankle sprain, however pain and disability are usually more severe – weight bearing can be quite tricky. A syndesmosis injury can be diagnosed during an assessment with a good history and clinical exam. Imaging may be required for more severe injuries to assess for the extent of ligament involvement and potential fractures as these will change the management plan. An early diagnosis is important as treatment is different for syndesmosis injuries compared to a lateral ankle sprain, and continued activity can progress the injury and lead to less optimal outcomes.

What does treatment involve:

This stage protects against further injury and allows the involved structures to heal optimally. A period of reduced weight bearing, brace or boot may be necessary to allow structures to heal. The extent and timeframe of joint protection is dependent on the severity of injury, as well as your lifestyle and how you use your ankle day to day.

This stage is designed to improve movement and function progressing back to everyday tasks such as walking and stairs. Range of motion and strengthening exercises are used to assist with this transition.

The activities/sport that you want to return to are broken down into specific movements. These are gradually introduced as your ankle can tolerate and are progressed back to a return to full function. An exercise program is used to build your capacity for these tasks and to help reduce the risk of recurrence.

In more severe injuries, a surgical review may be required. The most common surgery for a syndesmosis injury fixes tightropes between the tibia and fibula to stabilise the distal tibio-fibular joint. Rehabilitation following surgery follows the same process outlined above, with normal return to sport timeframe being anywhere from 2-6 months. 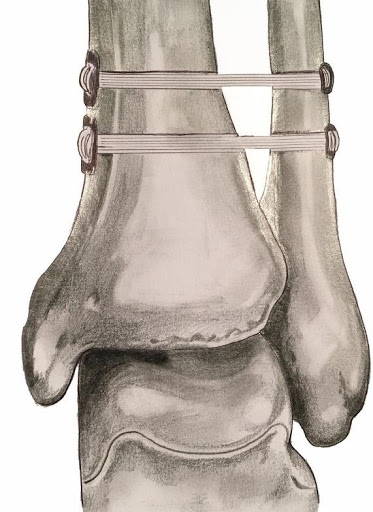 The most common surgery for a syndesmosis injury fixes tightropes between the tibia and fibula to stabilise the distal tibio-fibular joint.

What should you do if you have similar symptoms?

If you or someone you know has had a similar incident or symptoms described above, it is important to go and see your physiotherapist as soon as possible. Continued weight bearing on a syndesmosis injury can lead to sub-optimal healing, so the earlier it is identified and managed the better the outcomes will be.