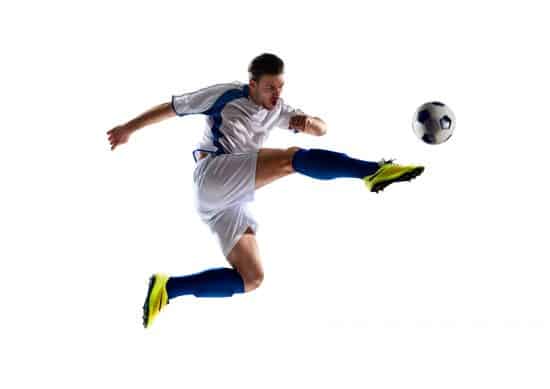 It has now been 7 weeks since the season of the NSW Premier League 2 has begun and out of the 3 teams I am providing physiotherapy for, a third of the players have an injury! Considering the lengthy preparation during a preseason of 4 to 5 days per week training, this is a large proportion of players.

The legs cop it!

As expected the legs are the area of the body most injured in soccer. Some of the most common include:

A large number of these injuries can be attributed to playing on a harder synthetic turf which is becoming increasingly prevalent. Some of these injuries include shin splints, turf toe and stress fractures on the ball of the foot. Furthermore, I have also seen more overuse injuries to tendons (also known as tendinopathies). The treatment of these lower limb injuries vary from simply changing shoes to creating an individualised rehabilitation program.  In our practice we often utilise shockwave for tendinopathies. But, the injury list does not stop there, I have also run out to assess a fractured collar bone and wrist after the boys have fallen on an outstretched arm.

Head knocks should never be underestimated!

One injury that came as a surprise was to our under 20’s goal keeper that sustained a head knock during a 50/50 challenge throughout the game. He was not getting up in a hurry but showed no signs of concussion both on the field and 1 hour after. It wasn’t until 6 hours after the injury that he had begun to feel nauseas and developed a head ache. This was a lesson that symptoms of a concussion may not be immediate but can present hours later and for this reason, any head knock should be monitored for at least 1 day after the injury.

With the Western Sydney Wanderers Senior Academy teams placing 2nd just under the Sydney FC seniors, I will be expecting this list of injuries growing more on our fight towards the top. Remember that our friendly team at The Healthy Body Company has enough combined experienced to handle any sports injury that you may have.

Dale Rolfe is a Physiotherapist at The Healthy Body Company in Penrith and Jordan Springs.  He is working with the Western Sydney Wanderers, and is pretty handy with the round ball himself.

Are stiff and sore knees stopping you from exercising?
23 July 2022

Do you have a rotator cuff tear?
29 April 2022
Our Clinics
Recent Posts
Go to Top