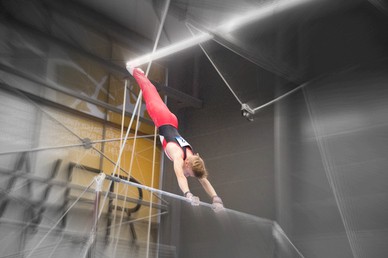 Geordie McColl, a talented gymnast from the Penrith region, first come to see us at The Healthy Body Company during his lead up for state trials for the National Men’s Level 7 Gymnastics NSW Squad. Geordie was experiencing ongoing back pain when hyperextending (bending backwards beyond the normal range of motion) during training and competitions.

While, our first thought was that Geordie would need to rest to allow his pain to settle, this wasn’t an option with the trials looming. Instead our goal was to do all we could to allow Geordie to complete at his trials to the best of his ability without causing long term damage.

Geordie has been a competitive gymnast at Penrith YMCA for the past 4 years. Geordie has always had natural athletic ability, and with his background of dance, he took to gymnastics right away. Even after one afternoon of practice, Geordie was able to teach himself how to do a proper cartwheel. Being a late starter for his sport, Geordie has proven himself to be a serious competitor in his level. In 2015, Geordie was awarded with Men’s Artistic Gymnastics Senior Gymnast of the Year at Penrith YMCA as well as being nominated for Men’s Artistic Gymnastics Junior Levels Athlete of the Year at the 2015 Gymnastics NSW Awards night. His favourite apparatus at the moment is high bar.

Geordie is being treated for a potential pars defect (stress fracture) in his lumbar spine. This type of injury usually causes low back pain predominantly on one side of the back rather than the centre of the back. It is caused by overuse and repetitive loading and unloading the facet joints in your spine. It is mostly felt when arching backwards, rotating at the waist or when straightening up from bending forward. Pain typically feels better with rest and only worsens with movement. Many people will try a few days or weeks of rest, during which the pain improves, although then returns again and worsens when they resume sport.

A pars stress fracture  or pars defect, involves a small connecting bone in the lumbar spine which is called the pars interarticularis. This bone connects the facet joints that are a chain of joints found on each side of the spine. These joints spread apart and have no pressure on them when you are sitting or bending forwards, although they press against each other during activities like running, jumping, kicking, rotation or arching backwards. This is a common injury in fast bowlers.  Due to the repetition of these movements during gymnastics, pressure is placed on the facet joints which is transmitted to the pars bone. As this bone is a small bone, which changes during adolescent growth, it is slightly thin and weak – making it more prone to injury.

If treated early, bony healing can occur and the risk of future back problems lowers. However, if not treated early, it will develop on the other side as well which leads to a lower healing rate and most often a permanent pars defect, called spondylolysis. When this occurs, it can lead to the spine below the defects to slip backwards over time, which is called spondylolisthesis – significantly increasing the risk of degenerative back conditions (e.g. disc herniation or nerve impingement) later on.

In order for young athletes to prevent a pars defect it is important to:

As a pars defect is a break in the bone, only rest and time allow healing initially. Most athletes are able to return to full participation in their sport after about 3 months. Once Geordie has completed his trials, he will need a period of rest from all aggravating activities for approximately one month. This phase will be tough for Geordie as he is a keen competitor who enjoys his club and state training almost every day of the week. Any injury though will inhibit his performance and limit the skills he is able to perform successfully. This means, rest after trials is essential to ensure optimal performance in competitions later this year. After this time, physiotherapy will progressively work on his strength and flexibility to reduce the risk of further injury. With physiotherapy and Geordie’s dedication, we are working towards him returning at peak performance for his next competition in August.

Over the next 6 to 12 months, Geordie is keen to continue to progress his skills and participate in the various local and state competitions. He is hoping to advance to Level 8 within the 12 months and even compete at next year’s state trials either in level 7 or 8, with the hope of making the NSW squad for the 2017 Nationals Competition. We wish Geordie all the best with his rapidly developing gymnastics career.

Is your body ready for this football season?? – kids edition
18 April 2022
Our Clinics
Recent Posts
Go to Top