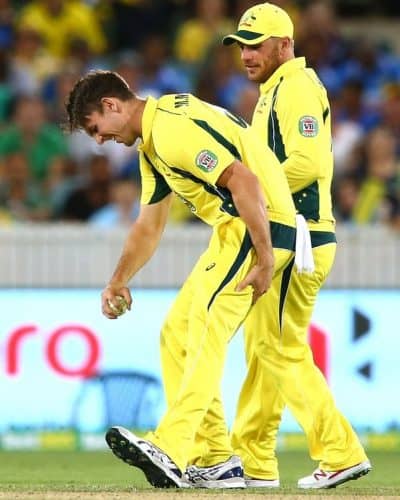 Mitch Marsh’s cramping video has gone crazy and so many of us took twisted delight in watching him try again and again to get up only to crumple in a heap. The Cricket Australia commentary crew couldn’t hide their amusement.

But what was going on and could Mitch have done anything to avoid it??

Cramps have probably befallen any person who has ever done any sport or exercise. In fact you’re possibly casting your mind back to when you had one yourself. Mitch Marsh being attended to by team physio Alex Koutouris

Unfortunately, very little is known about cramps and how to avoid them.  There is a lot of mythology and old wives tales. When we don’t know exactly why a problem occurs we end up with a lot of anecdotes, often conflicting with each other. This makes it difficult to know exactly how to deal with these problems. A phone call from my dad interrupted me writing this blog, he told me he swears by tonic water to fix a cramp. n=1 dad.

Exercise Associated Muscle Cramps are best described as a sudden, tight and intense pain that most commonly occurs in the in the muscle groups directly involved in the exercise task e.g. gastrocnemius (calf) while running. (Thanks Australian Institute of Sport!!)

They can range from a mildly irritating twinge to an excruciating pain, and may last for a few seconds or several minutes.  Cramps can be a one-off or occur several times before the muscle relaxes and the pain goes away, just like what happened to poor Mitch.

EAMC’s occur when a muscle involuntarily and strongly contracts and does not relax.  This looks to be due to abnormal stimulation of the muscle, the precise mechanism is unknown.

Dehydration and sodium and other mineral losses have long been blamed for causing cramps, but research trying to prove this has been inconclusive. Research on marathon and ultra-marathon runners showed no difference in hydration for those that got cramps and those that did not.

Cramp is more likely to occur in tired muscles and ones that are already in a shortened position.  Therefore poor fitness or exercising at high workloads can increase the likelihood that they will occur, while poor stretching habits may also contribute.

GPS data was released on Mitch Marsh’s workload. It turns out he ran 18km during that infamous match, nearly a half marathon!! So tired, shortened muscles were very likely a candidate in his cramps. We all saw him scarfing down salt tablets and drinks, being stretched out and resting, and then get back out there and bowl again. Who’s to say which of all the treatments thrown at him worked? That’s the thing with cramps.

Susan Williams is an Accredited Practicing Dietician and Health Counsellor.  She has written a number of articles that might be of interest you to including: