ACL rupture – is surgery the answer? 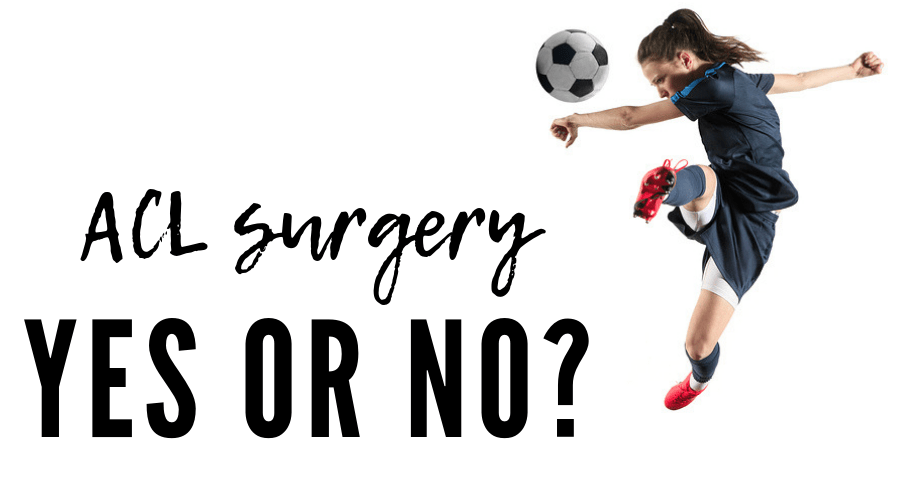 Anyone involved with sport would have heard about the “dreaded ACL” injury (commonly referred to as a “torn ACL”, “ruptured ACL” or “ACL disruption”).  Jude, has done a great blog explaining exactly the ACL is.  You can read it here.

In my own practice, I have noticed that when people tear their ACL, there is a tremendous urge for them to get it “fixed” as soon as possible. Recent research suggests that for many people, this strategy is potentially going to slow down recovery, as I will explain.

Early surgery may not be the answer

Having an ACL reconstruction as soon as possible isn’t a great idea. After an ACL injury, the knee is very swollen.  This causes the muscles around the knee stop working properly and feel immediately weaker. The swelling also inhibits range of motion of the knee (you will notice that bending and straightening the knee is difficult and limited). If operated on in this state, regaining strength and range of motion in your knee takes a heck of a lot longer.

A recent study has shown that those individuals who underwent 5 weeks of pre-op strengthening had better outcomes with their operated knee 1 year post surgery compared to those who didn’t.

The next point I want to raise is, not everyone NEEDS an ACL reconstruction, even if you completely tear your ACL. This is particularly the case for people who are not looking to return to a sport requiring rapid change of direction or pivoting movements. Interestingly, there is new research that is suggesting around 40-50% of people that sustain an ACL injury can still return to change of direction sports at a high level without surgery. This is achieved by strengthening the muscles around the knee, as well as retraining the nervous system to regain better control of the leg as it moves in space.

A 2013 study of 121 people who were highly active, near-elite young adult group of males and females  the typical cohort that present to primary care with these injuries) randomly separated them into 2 different groups.

After 2 years, only 1/3 of Group 2 ended up feeling like they needed to have their ACL surgically reconstructed. After another 3 years, this number was about 50%. At both the 2 and 5 year mark, assessments of function demonstrated that there were no significant differences between either group.

What does this tell us?

You roughly have a 50:50 shot of being able to return to sports such as netball, footy (any code) or soccer if you rupture your ACL, without surgery. The main drawback to this is you’d need up to about 3 months of rehab to work out whether you’re one of the lucky ones that can play without an ACL. If successful though, you could well be looking at a return to sport within 6 months, compared to the usual 12 months that is recommended as a minimum for non-professional athletes after surgery.

Here  Maddy talks about some exercise programs that can cut your risk of ACL injury by half.

If you would like to chat more, or hear more about this issue, feel free to get in touch.

Nathan is a physiotherapist in our Jordan Springs practice.

Here are the articles Nathan was referring to: